Yoruba activist, Sunday Adeyemo popularly known as Sunday Igboho, was involved in a violent confrontation with operatives of the Department of State Security Service (DSS) during a recent Yoruba Nation rally in the South-West.

In a viral video, supporters of Igboho could be heard calling them ‘DSS’ officials even as they assaulted the security operatives whom they accused of ‘trailing’ Mr Igboho.

Igboho, who has been leading a campaign for the actualization of Yoruba nation, was also seen in the video as his supporters harass the security officials.

The DSS officials who were probably avoiding a bloody confrontation were later chased out of the area by the Oduduwa agitators.

KanyiDaily recalls that Sunday Igboho held a rally in Akure last weekend where he claimed that there is no going back on the agitation for Yoruba nation. 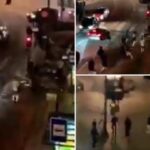 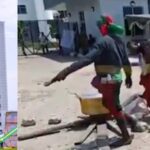