Many Nigerians are currently signing a petition asking for a criminal review of alleged drug dealing by Bola Tinubu, presidential candidate of the All Progressives Congress (APC) in the United States.

Petition Against Tinubu Over Alleged Drug Dealings In US

The petition which was initiated by Ade Lani on Tuesday, 19th July 2022, against Tinububu on Change.org, has gotten over 20,000 signatures within 19 hours.

Lani said the petition titled, “Petition for a criminal review of Bola Ahmed Tinubu’s drug dealings in the USA,” will “enable Nigerians know who their potential president is in character and history.”

According to him, “They will be able to make the right decision on who they commit their future and leadership of the country to.”

Petition for a criminal review of Bola Ahmed Tinubu's drug dealings in the USA – Sign the Petition! https://t.co/QEAAhJYDvQ via @Change

READ:  "Sometimes When I Look At My Curvy Body, I'm Grateful To God" – Anita Joseph Brags

The petition follows a report by US-based Nigerian journalist, David Hundeyin in West Africa Weekly that linked the former Lagos Governor to a drug business in Chicago.

The history of Tinubu became easy to track following his journey to Chicago in 1975, after claiming to be in exile.

The former Governor upon his arrival in Chicago first spent 2 years gaining an Associate degree at Richard J. Daley College.

He thereafter proceeded to Chicago State University where he studied Accounting, completing his Bachelor’s degree in 1979.

READ:  Buhari May Have To Sack Workers In Order To Meet Minimum Wage Demand – Chris Ngige

Tinubu, in an interview with The News, claimed that he got a job with Deloitte & Touche, where he supposedly received an $850,000 bonus as a result of his work on a single onsite engagement at the Saudi state-owned oil firm.

West Africa Weekly, however, disclosed that a document, which was obtained from the US District Court of the Northern District of Illinois Eastern Division, allegedly revealed damning information about Tinubu.

The document contains a comprehensive federal indictment and associated case files from July 1993 containing clear and incontrovertible evidence that Tinubu was allegedly involved in laundering proceeds of heroin trafficking for a Nigerian drug ring in Chicago.

KanyiDaily recalls that a former presidential aspirant, Reno Omokri had also claimed that he have documents to prove that Bola Tinubu is a drug lord. 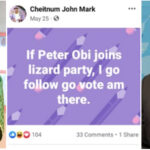 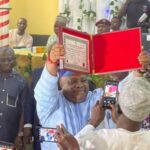