A local musician from Benue State, Jerry B Achirkpi has accused a woman identified as Mrs Ujunwa Benaihils Ugwoke of beating his 10-year-old daughter, Precious Korshima, to death in Enugu State. 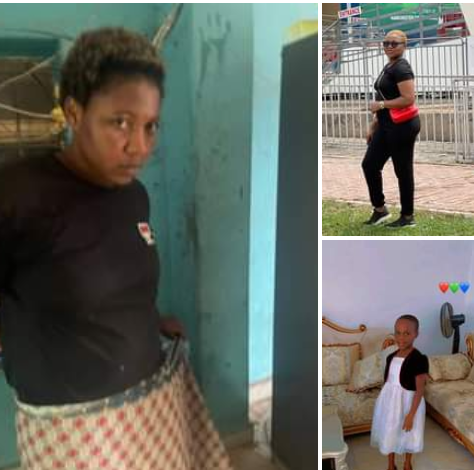 Girl Beaten To Death In Enugu

In a post shared on his Facebook page, Jerry narrated how his daughter died after he gave her to Ujunwa through a Port Harcourt-based woman, Mrs Nelly Okoroafor, who approached him in March 2022.

According to him, Okoroafor pleaded with him to give her his daughter to train in school through her friend, Ujunwa, and in return, the minor would look after Ujunwa’s newborn baby.

The Benue-based musician said after he sent his daughter to Ujunwa in Enugu, he received a strange call from an unknown caller who used Ujunwa’s phone number to inform him that his daughter was kidnapped alongside Ujunwa and her own child on the 10th November, 2022.

Jerry said the abductors demanded N20m ransom as condition to release his daughter but he told him that Precious was only a house help to Mrs Ujunwa.

However, Mrs Ujunwa and her own daughter were allegedly released from the kidnapper’s den and Precious was alleged to have been murdered.

The man said Ujunwa was later arrested by the Anti-kidnapping squad of the Enugu State Police Command, over his daughter’s alleged disappearance and murder.

Upon her reported arrest and interrogation, the suspect admitted that she beat Precious to death and dumped her body in a bush near a community called Ituku Ozalla in Enugu.

A man claiming to be the chief in Ituku Ozalla told the police that he had directed youths in the community to bury the corpse but instead they burnt it.

Read full story below: “Sometime in March 2022, a businesswoman MRS. NELLY OKOROAFOR that lives in Port Harcourt, Rivers State, approached me and pleaded with me to give her my little daughter, MISS PRECIOUS OKORSHIMA (10 years old) to train in school through her friend in Enugu, MRS. UJUNWA BENAIHILS as it would be her own little way of helping me and to also assist her look after her new born baby.

I sent my little daughter to MRS UJUNWA BENAIHILS who lives in Fidelity Estate, Enugu. She was living with her until 10th November, 2022. I received a strange call from an unknown caller using MRS. UJUNWA BENAIHILS’ s phone number, that she was in captivity as they were kidnapped.

I pleaded with the alleged kidnapper that my little daughter was only but a house help let me get in touch with the family of MRS. UJUNWA BENAIHILS.

I did get in touch with MRS. UJUNWA’S family but they all feigned ignorance or the alleged kidnap including her husband who stay abroad

However, in bizarre turn of events MRS. UGWOKE and her own daughter were allegedly released from the kidnapper’s den and my little PRECIOUS was alleged to have been murdered, according to MRS. UJUNWA BENAIHILS.

As at today the whereabout of my daughter, PRECIOUS still remains a mystery even as it seems there Is a concealed fact surrounding the whole story

Now she claimed that she beat her to death and drop the body in the bush near a community called ITUKU OZALLA in Enugu state.

There is a man claiming to be the chief in ITUKU OZALLA community in ENUGU STATE. He came and CONFIRMED before Antikidnapping squad Enugu that he ordered youths to buried the corpse but they burn the corpse!!!! still today Police did not take me to that place.

“I NEED MY DAUGHTER PRECIOUS KORSHIMA. I NEED JUSTICE. PLS help me share.” 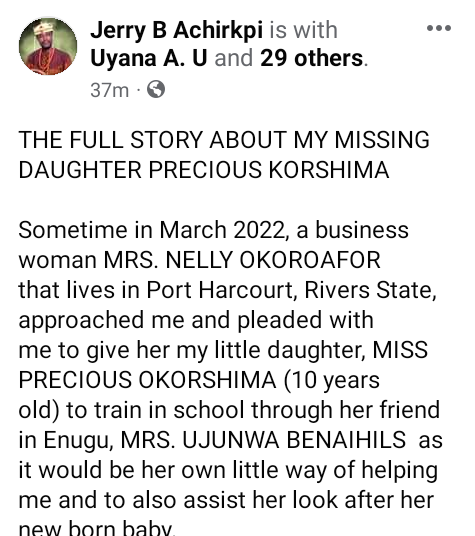 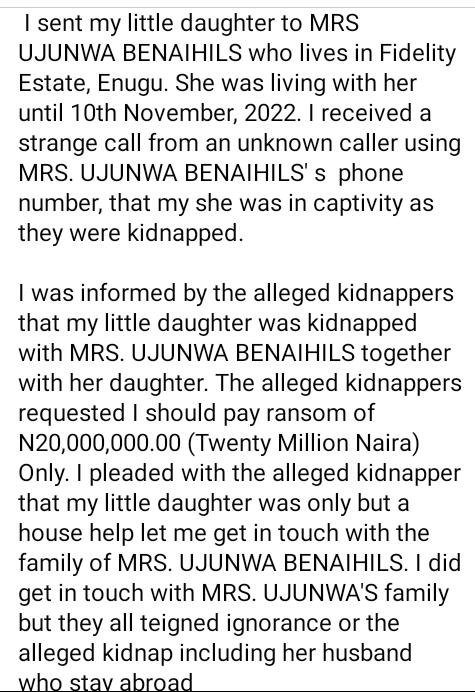 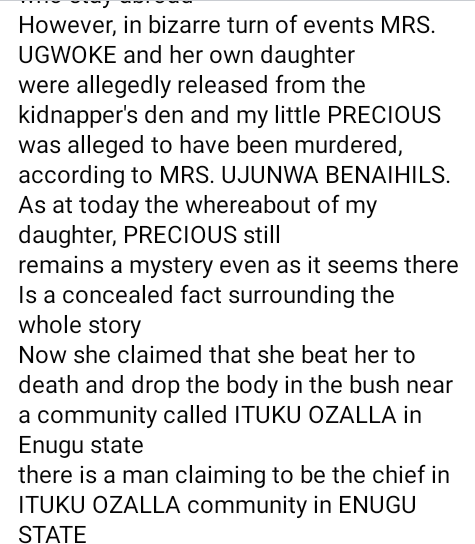 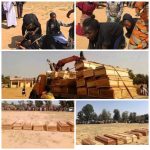 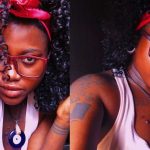