The Owerri office of the Independent National Electoral Commission (INEC) in Imo State was on Monday morning attacked by gunmen. 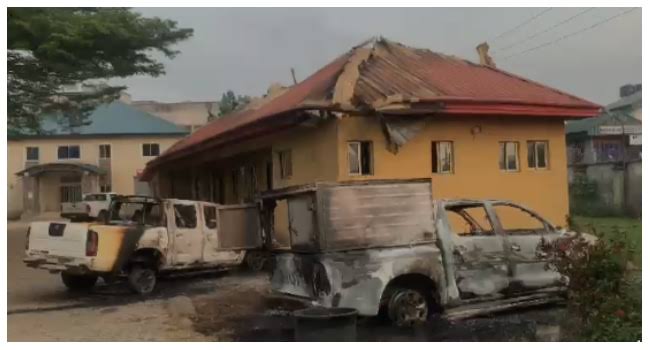 Reports say parts of the building were damaged after it was torched by a firebomb.

Abbatam said three gunmen were killed while two firebombs were recovered from the scene.

The latest attack comes a few days after an office of the electoral umpire was attacked in the Orlu Local Government Area of the state.

Recall that suspected hoodlums had similarly torched the commission’s offices in Ebonyi, Osun, and Ogun States within the past four weeks, sparking fears that some people were plotting to derail the conduct of the 2023 elections.

Reports say the Owerri attack, which was carried out around 3 am this morning, was, however, repelled as three of the perpetrators, including their commander, were gunned down.

Also, AK47 rifles and some pump action guns, and eight vehicles were recovered from the hoodlums.

One source was quoted to have said, “This morning, gunmen launched a vociferous attack on the INEC office in Owerri, Imo State but the joint security team was able to repel them and killed three of the attackers, including their commander.

“Seven vehicles were recovered, including seven AK47s and pump action rifles. Many of the gunmen escaped with bullet wounds. But one police vehicle was burned by the hoodlums.”

But Abattam said only three AK47 rifles and vehicles were recovered.

It was gathered that security had been beefed up in parts of Owerri, following the incident.

In other news, Kanyi Daily reported that the Presidential Candidate of the Peoples Democratic Party (PDP), Atiku Abubakar on Sunday evening celebrated former minister of information and former President-General of Ohaneze Ndigbo Worldwide, Chief John Nnia Nwodo on the occasion of his 70th birthday anniversary.

May You Find Peace, Joy, Fulfillment – Atiku Celebrates Nwodo At 70