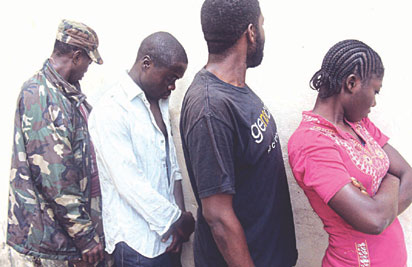 Operatives of the Special Anti Robbery Squad, SARS, Ikeja, Lagos have arrested a female house help who allegedly connived with her boyfriend and two fake soldiers to rob her master of over 100,000 Dollars.
The 23 year-old house help, Adaeze Ijeoma, allegedly sneaked into her master’s bedroom located in Maryland, Lagos, last month, after he traveled out of the country. Unsure of where to keep the foreign currency, she reportedly took it to her boyfriend, one Onyebuchi Uche, only for him to flee with the money, leaving Adaeze in doubt.
On his part, Onyebuchi , who has been jobless for years, rushed to Alade market, Ikeja where he changed some of the dollars to naira and thereafter, deposited the sum of N8 million in two banks. He thereafter, told operatives at SARS that he also bought a car; ‘End of Discussion’ and a plot of land in an undisclosed area where he had started molding blocks for building.
Determined to get her own share of the loot from him, betrayed Adaeze was said to have confided with one of her relatives identified simply as Nnamdi to help retrieve the money from her estranged lover.
Nnamdi and two other persons clad in Military camouflage reportedly stormed Maryland last week where on spotting Onyebuchi, bundled him inside his new vehicle and took him to a hotel in Mende area of Lagos, where they reportedly tortured him and forced him to disclose where he kept the money. They reportedly managed to get the sum of N6.5 million from two separate banks where Onyebuchi kept the money, including the new car he bought.
However, just when Adaeze was contemplating on what to do with her own share of the recovered loot, an eight man robbery gang reportedly stormed her master’s home, where an unspecified amount including his phones and other valuables were carted away.
The robbery case was reported at SARS after which Adaeze and two other persons were arrested. Although she denied having a hand in the recent robbery, she however, disclosed her role in the theft of 100,000 Dollars.
In this interview with Crime Guard, she said:

“ I am from Akri village in Ogbaru Local Government area of Anambra State. I left the village in 2010, after my secondary school education in search of greener pastures in Lagos, where I started working as a house-help for Chief Uche and was paid the sum of N10,000 monthly. I lived in the same apartment with chief and to be honest to him, he has treated me as a member of the family.

“I met my boyfriend Onyebuchi after being lonely for a while in 2011. I was tempted to steal my boss’s money and gave it to my boyfriend to keep so that we can start our own life. I gave him because he promised he would marry me. I stole the money so that we can, at least, get a lease of life when married. I believed he would use it wisely because he has always had plans for the future.

“But I began suspecting foul play after he stopped picking my calls . When I went to where he lives in Mende, I was told he usually came home late. Later, those who know us told me he started driving a car. That was when I contacted my uncle, Nnamdi to help retrieve the money from him. On the day, he was to go with his two soldier friends, I waited at Mende for Onyebuchi and when I sighted him, I pointed him to them and left for home immediately.

After he was tortured, he called me on the phone that he was sick and when I went to see him, he said some robbers stole the money from him and even battered him to stupor“I swear, I do not know anything about the other robbery operation in the house. The robbers came armed and forced me to take them round the house. They only got some money in the guest room and took my master’s Black berry phone, his gold wrist watch and other things. They also took my phone but left it at the backyard. I did what I did out of love for my boyfriend, not knowing he would betray me. Now he has fled, leaving me to bear the consequences alone, without having a taste of the money, “ she stated in tears.

On his part, Nnamdi claimed he was once a military personnel but resigned on his return from a foreign mission where he got the sum of N2 million. Surprisingly, Nnamdi was discovered to be an in-law to Chief Uche. “I am from Akaokwa village, in Ideato North Local Government area, Imo State and the complainant is married to my father’s sister. I used to sleep in their house any time I came to Lagos to sell palm oil and at times, I spent one month.

“When Adaeze told me about the money, I threatened I was going to tell her boss. But on second thought, I thought if I got the money, I could use it to enrich myself. I then contacted Chima, my friend who is now at large. It was Chima who contacted a soldier who initially gave his name as Corporal Humphrey. It was later we discovered he was a dismissed soldier. We lodged at Tropicana Hotel in Mende Maryland ,where we took Onyebuchi to. I was in full Army uniform while Ajaghe my other friend, was wearing a camouflage cap, pretending to be soldiers.

“We tied him to a ceiling fan and beat him in order to force him to tell us where he kept the money. We seized his car. And ordered him to transfer the N2.4 million he said was in First Bank and N5.5 million in Fidelity bank to my account for easy withdrawal. We used ATM card to withdraw the money for one week from one of the banks while we withdrew the rest from separate branches of the other bank. At the end, I gave Onyebuchi’s car to Chima to keep and N500,000 to Ajaghe , while I kept the rest, with the hope of giving some to Adaeze and keeping the rest”, he said, adding that he knew nothing about the robbery operation at Chief Uche’s apartment.

The Commander, SARS, Mr Abba Kyari, said the suspects would be charged to court while efforts were still on to arrested other fleeing members of the gang.
Vanguard

PHOTOS: Mum To Baby Born With Tail Begs Doctors To Save His Life