The Attorney-General of the Federation (AGF) and Minister of Justice, Abubakar Malami (SAN), has written a letter to President Muhammadu Buhari, seeking the removal of ) Ibrahim Magu as the Acting Chairman of the Economic and Financial Crimes Commission (EFCC). 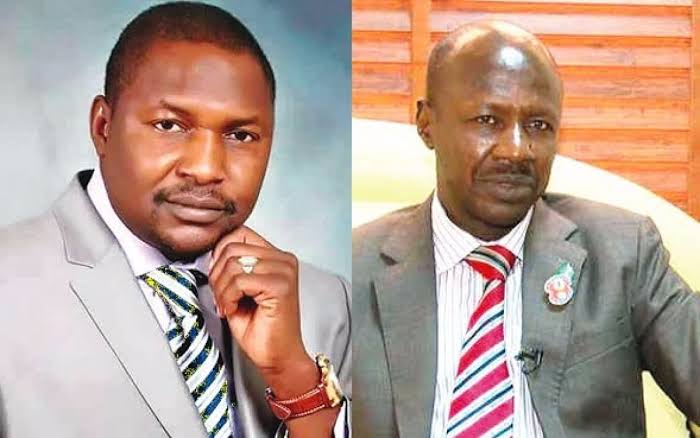 In the letter to the president, Malami anchored his recommendation on several grounds “raging from diversion of recovered loot to insubordination and misconduct” by Magu.

Multiple sources told ThisDay on Thursday that Malami included a short list of three candidates for consideration to replace Magu.

But Magu is fighting back and his supporters within the Presidency say ”removing Magu at this time when he has given muscle to Buhari’s anti-corruption fight would be a mistake.”

“It is painful that the EFCC boss is facing certain powerful forces who have decided to remove him in spite of his remarkable achievements,” sources stated.

READ:  Girl Locked Up In Toilet, Tortured And Starved By Her Mother After Prophet Claimed She Was Possessed

But sources said given the weight of Malami’s allegations against Magu, the president may be inclined “to set up a probe panel that will look into the veracity of the allegations and make necessary recommendations.”

One of the sources told select journalists that “I can authoritatively tell you that though Magu has survived previous plots to remove him, the AGF’s legal opinion remains the deadliest plot to get Magu out of the EFCC as AGF’s letter to the president contained 22 weighty allegations that require Buhari’s decision on whether or not to send Magu’s name to the Senate for confirmation or replace him….. This is because the office of the AGF is the supervising ministry of the EFCC and so his legal opinion cannot be treated with levity.

“For example, Malami alleged accounting gaps or discrepancies of figures concerning the recovered assets, claiming that Magu was not transparent enough in the management of recovered assets…”

A Magu supporter said:” It will interest you to note that Malami accused the EFCC boss of disclosing a total naira recovery of N504 billion but lodged N543 billion in the Recovery Account with the Central Bank of Nigeria (CBN). Incidentally, this exceeded the disclosed figures by N39 billion.”

According to the supporter of the EFCC boss, what should be a point of commendation is now being used against Magu.

Others said: “Malami also accused Magu of blatant display of arrogance and insubordination to him as supervising minister of the EFCC.”

According to the source, Malami claimed that most of the recovered assets by the EFCC were allegedly sold by Magu without the knowledge of anyone.

“But it is unfortunate that this claim is at variance with the public auction of assets by the EFCC,“ the source added.

It will be recalled that many efforts have been made in the past to make the president to drop Magu, since his appointment as EFCC acting chairman on November 9, 2015.

The plot for his removal twice stalled his confirmation by the Eighth Senate, prompting him to remain the interim head of the nation’s foremost anti-graft agency.

However, when the presidency insisted on Magu being confirmed, the previous Senate demanded the reversal of a damning security report on the EFCC boss from the Department of State Services (DSS), which it had cited as the reason for his non-confirmation.

Many groups and individuals had also gone to court to challenge the continued stay of Magu as the acting chairman of the commission.

But Justice Ijeoma Ojukwu of the Federal High Court in Abuja, in a judgment delivered in 2019 over consolidated suits on Magu status, had held that there was no time limit in the law establishing the commission for him to act as the EFCC boss.

The judge further held that Buhari is holding the proverbial “yam and knife” on Magu, adding that the president should do the needful by sending the name of Magu to the Senate for confirmation

READ:  I Became Born-Again Christian While In Exile With My Family In United States - Remi Tinubu [Video] 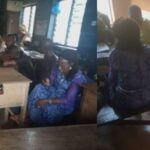