Amazon CEO and world’s richest man, Jeff Bezos now has a fortune that exceeds $200 billion on Wednesday as shares of the e-commerce giant climbed to a record. 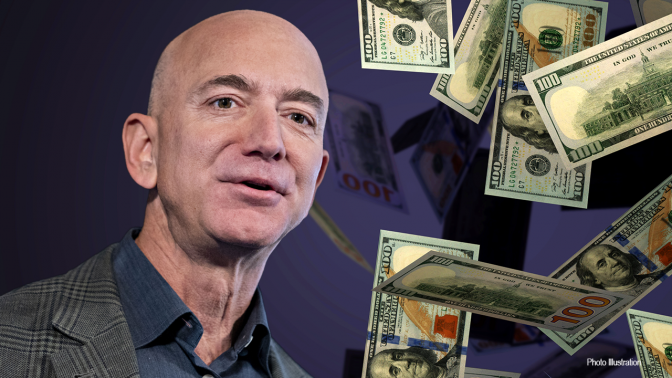 Forbes estimated that Bezos was worth $204.6 billion when the markets closed Wednesday, while Bloomberg pegged his wealth at $202 billion — nearly $88 billion more than the world’s second-richest person, Bill Gates, who’s currently worth $116.1 billion.

Bezos would be even richer had he not gone through the most expensive divorce settlement in history last year. When he split from ex-wife, MacKenzie Scott, last July, he agreed to give her 25% of his Amazon stake, a chunk of stock now worth $63 billion.

Even after giving away $1.7 billion in charitable gifts earlier this year, MacKenzie Scott is currently the world’s 14th-richest person and second-richest woman, behind L’Oréal SA heiress Françoise Bettencourt Meyers.

Bezos isn’t alone among tech titans with fortunes surging to massive new heights. Facebook’s Mark Zuckerberg ended Tuesday as a brand-new centibillionaire, worth $103.1 billion after adding $3.4 billion to his fortune in one day, on Facebook stock gains.

That surge continued early Wednesday afternoon, with Zuckerberg up an astonishing $6 billion just on Wednesday as of publication time. He’s now worth $109.1 billion.

Meanwhile, Tesla CEO, Elon Musk extended an extraordinary stretch of wealth gains to become a centibillionaire. His fortune grow by $73.6 billion this year, a jump still smaller than Bezos’s, who is up by $87.1 billion.

Tesla Inc. shares rallied Wednesday, pushing his net worth to $101 billion, according to the Bloomberg Billionaires Index, a listing of the world’s 500 richest people.

There are now more centibillionaires on the planet than ever. Joining Bezos, Gates and the newly crowned Zuckerberg and Musk is LVMH chair Bernard Arnault, who first joined the 12-figure ranks last year.

Though his net worth slipped to about $80 billion at the height of the coronavirus pandemic in March, Arnault reclaimed the centibillionaire title in May and today is worth about $115 billion. This makes him the third-richest person on earth–$90 billion poorer than Jeff Bezos.

Bezos, Gates, Arnault, Zuckerberg and Musk are currently centibillionaires, the only people in the world enjoying 12-figure fortunes.

KanyiDaily had reported that Jeff Bezos is on track to become the world’s first trillionaire by 2026, due to the coronavirus spike on Amazon.

Survival Fund Registration Portal: How to register for survival fund 2020