The Academic Staff Union of Universities (ASUU), has accused the the Minister of Labour and Employment, Chris Ngige, of being dishonest over the years on the negotiations and non-implementation of 2009 FG-ASUU agreements. 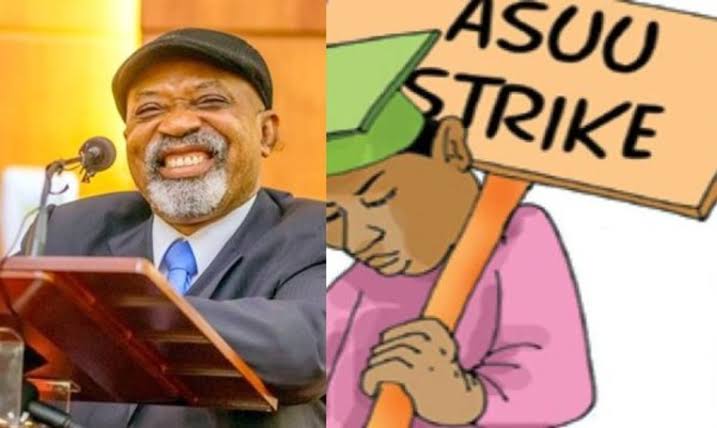 The Coordinator of ASUU (Abuja Zone), Prof. Theophilus Lagi, during a press conference at the Gwagwalada campus of the University of Abuja, said lecturers would not call off the strike until the government did the right thing.

He blamed Ngige over the prolonged strike, accusing him of showing disdain for Nigerian lectures through his utterances and has failed to play the role of an unbiased umpire in moderating the imbroglio.

Hence, the union urged its members to seek other legitimate means of survival as the government has not released salaries withheld since February 2020.

READ:  Parents Of Children Convicted For Cultism In Lagos Will Be Punished - Gov Sanwo-Olu

“Today, we wish to let Nigerians, especially our students and parents know that there is no hope in sight to ending or suspending the ASUU strike that has lingered for several months as government is yet to show serious commitment towards addressing our core demands.

“Our members have been advised to seek other legitimate means of survival as the government has not released salaries withheld since February, 2020.

“One needs not be a psychologist to understand the behaviour and recent utterances of the Minister of Labour and Employment, Dr. Chris Ngige. The Minister has clearly shown his disdain for Nigerian academics and has failed to play the role of an unbiased umpire in moderating the imbroglio.

“He has now become the spokespreson to the Accountant General of the Federation and the Ministry of Finance, instead of finding solution for lecturers to get back to work,he is turning the wheel of progress backwards by setting ASUU on a collision course with other presure groups in the university. Clearly Dr Ngige is on a war part with ASUU.

READ:  Nigerians Will Feel The Impact Of My Projects When I Leave Office - President Buhari

“As men of letters, we would have elected to ignore Senator Chris Ngige’s deliberate misinformation and deceit. So, this response is more to straighten the record than it is to massage the minister’s ego.

‘’In one of his comedies of error, Ngige told the nation that the striking lecturers had been paid salaries up to date when he knew university lecturers were being owed salaries for between nine and six months for no just cause.

‘’In another fit of treachery, the Minister during a recent budget defense at the National Assembly, while upholding the existence of University Autonomy Law, attempted in vain to redefine its provisions.

“In the past few weeks, for instance, Ngige has said one thing when he met with the union and a different thing on the same subject in interviews with the media.

READ:  NIPOST Boss Cries Out To Nigerians For Help, Accuses FIRS Of 'Stealing' Business From Them

“This double character of a Minister and a purported negotiator in the face-off should be a source of worry to not only the body of Nigerian students but also parents who patronize public universities as the minister’s untoward attitude is undermining the reopening of these schools.

“In furtherance of his intimidation of the lecturers and misinformation of the public, Ngige argued that autonomy could not hold in the prevailing circumstance. On this, we would like to educate the Minister that public universities in Nigeria are creatures of law as each university is established by an Act enacted by the National Assembly.”

Meanwhile, the students unions of universities in the South-West has given a seven days ultimatum to the FG to end the ongoing eight months old ASUU strike or face aggressive nationwide agitation.

READ:  Atiku On Course To Win, Buhari Should Start Packing His Bags – Fani-Kayode