The students unions of universities in the South-West has given a seven days ultimatum to the Federal Government to end the ongoing eight months old strike by the Academic Staff Union of Universities (ASUU) or face aggressive nationwide agitation. 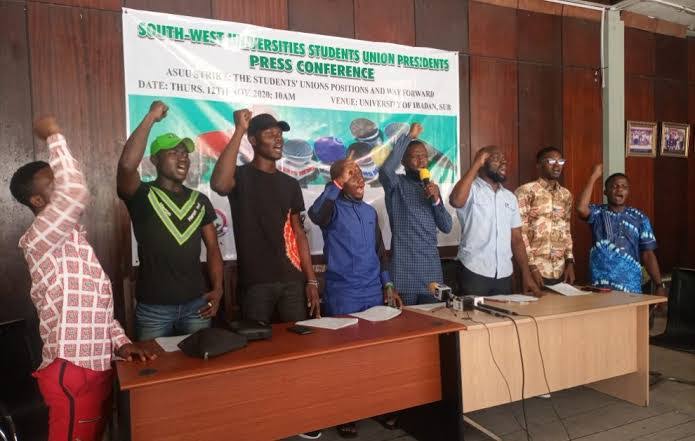 The Presidents of Students Union Government of the Universities gave the ultimatum while addressing reporters at the University of Ibadan on Thursday, November 12, 2020.

The student leaders who decried the eight months of deadlock in engagements between the FG and ASUU, called for a compromise between the two parties to save students’ future.

Oloyede noted that the ASUU struggle for the revitalisation of universities, improvement in infrastructure, regulation of payment of salaries was for the betterment of universities hence should not be undermined by the government.

Oloyede said their agitation, after the seven day ultimatum, will feature mass mobilisation of students in protests and mass actions that surpasses the #EndSARS protests.

“We, the great students of the federation, hereby demand an immediate end to the incessant ASUU strike, adequate funding of the education sector and prioritizing education as key to sustainable growth and development. We request an end to the ongoing strike by the Academic Staff Union of Universities (ASUU).

“The struggle of ASUU should never be undermined as we all truly know a revitalization and improvement in the quality of infrastructure and regulation of payment of salaries is needed.

“Ending ASUU strike by giving utmost consideration to our demands is key and a way to kick-start. Do this and secure the future of our beloved nation.

“In view of the above, we hereby give the Federal Government an ultimatum of seven days to resolve the crisis and get us back to school; else, there would be aggressive nationwide agitations thereafter.

“We are going to use legal means for our agitation and others that are within the legal framework of the nation. All means of agitations will be used. Protest is one of the means”.

On his part, the President, University of Ilorin Students’ Union, Wisdom Okoko, said: “ASUU strike is killing us. We won’t fold our hands and allow them to ruin our lives and future.

“We can’t continue to keep quiet. ASUU and government are taking us for a ride. ASUU is fighting for its interest. The earlier they respond to our demand, the better for us.”

Speaking further, Oloyede urged the government to form a committee all student union leaders across the country and government representatives to handle students welfare.

KanyiDaily had reported that ASUU have been on strike since February 2020 over non-implementation of agreements and the use of a new payment programme (IPPIS) for their salaries.

READ:  25-Year-Old Man Who Was Dumped By His Girlfriend, Commits Suicide In Lagos