Prince Kpokpogri has dragged Tonto Dikeh and the DSS to court, seeking enforcement of his fundamental rights. 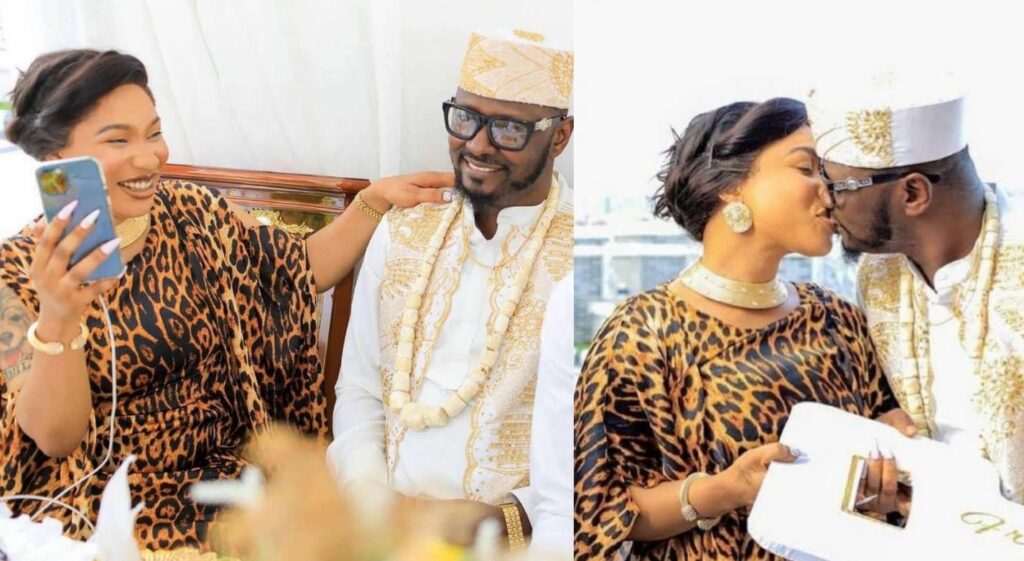 Prince Joseph Kpokpogri, the estranged lover of Nollywood actress, Tonto Dikeh, has dragged the actress and the Department of State Services (DSS) before a Federal High Court in Abuja to seek the enforcement of his fundamental rights.

KanyiDaily recalls that Tonto Dikeh had recently taken legal actions against Prince Kpokpogri and also sanctioned his arrest by the DSS, which he denied.

In the court document, Tonto accused Kpokpogri of going about blackmailing her after allegedly planting CCTV cameras in his own apartment to record their activities whenever she came visiting.

The politician was also accused of obtaining the sum of N8 million naira from the actress but was only able to pay back N6 million with a pending balance of N2 million.

Tonto further alleged in the suit that her Toyota Hilus van bought in her name is also in the custody of Kpokpogri which he has refused to return despite several demands.

In a suit dated September 20, 2021, filed on Wednesday at the Federal High Court in Abuja, Kpokpogri prayed the court for a restraining order stopping the DSS from further inviting him.

Kpokpogri, through his Lead Counsel, Ovie Justice Ojefia, also asked the court to direct Tonto Dikeh and the  DSS to pay him N10 billion as compensation for the mental trauma, emotional stress and severe damage caused him due to the invitation extended to him.

Kpokpogri’s counsel wants the respondents to jointly and severally pay him the damages. No date has been fixed for the hearing of the case at the time of filing this report.

READ:  Kizz Daniel Arrested In Tanzania After Failing To Show Up For Paid Concert [Video]

Why I Dragged Tonto Dikeh To Court – Prince Kpokpogri

In the affidavit in support of the Originating Motion on Notice, Kpokpogri deposed that he decided to go to court to have his fundamental rights protected because they are being threatened.

“That I had a romantic relationship with Miss Tonto Dikeh being the 2nd Respondent herein for about three months beginning from 3rd June, 2021 and the relationship ended on or about 19th August, 2021,” the affidavit reads.

”That the 2nd Respondent has continuously issued oral threats against me that she is going to use all her connections and contacts to bring me down to nothing simply because I separated from her.

”That I am aware that the 2nd Respondent engaged certain strange heavily built men with dark shades who started tailing my movement around town shortly after 19th August, 2021 when I ended the romantic relationship with the 2nd Respondent.

”That I thereafter became worried that the 2nd Respondent could execute her threats, considering her wide popularity and connection in the Nigerian film industry.

”That at all times material to our romantic relationship, the 2nd Respondent always requested and I allowed her to use my Black Colour Lexus SUV LX570 with Registration Number – ABJ 04 JN and Chasis Number – JTJHY7AZ7H4237876. Copies of vehicle documents are attached as EXHIBIT D.

”That upon my return from a trip to Asaba, Delta State around 20th August, 2021, I discovered that the 2nd Respondent had forcefully taken my said Black Colour Lexus SUV LX570 with Registration Number – ABJ 04 JN and Chasis Number – JTJHY7AZ7H4237876 to her residence being House 3A, No. 2, Ismaila Mamman Close, Katampe Extension, FCT-Abuja. Picture of the vehicle is attached as EXHIBIT E.

”That during my birthday celebration which took place on 27th June, 2021, the 2nd Respondent voluntarily gifted me a Toyota Hilux in the presence of other persons without any papers whatsoever to support transfer of ownership from her to me.

”That because the 2nd Respondent failed, refused and/or neglected to hand over necessary documents of the Toyota Hilux vehicle to me, I requested her to come and take it back before our relationship turned sour but she turned a deaf ear.

”That I was however surprised that one Edwin Esq. of FCT Command of the Department of State Services (DSS) with office at No. 7, Gamal Abdel-Nasser Street, off Julius Nyerere Crescent, near Kapital Klub and Apartments, Asokoro, FCT-Abuja being under the supervision and control of the 1st Respondent called me and sent a text message vide telephone number 09052460445 on Thursday, 16th September, 2021 inviting me in connection with my estranged relationship with the 2nd Respondent. Screenshot of the text message is attached as EXHIBIT G.

”That the 2nd Respondent caused Kanyi Daily to publicise untrue, fictitious and unsubstantiated story on the same Thursday, 16th September, 2021 vide Kanyi Daily against the person of the Applicant with the caption: ‘Tonto Dikeh’s Ex-lover, Prince Kpokpogri Arrested By DSS Over Blackmail And Extortion’. Copy of the online newspaper publication is attached as EXHIBIT H.

”That I verily believe that the said invitation by the 1st Respondent is likely targeted at violating my fundamental rights to dignity of human person, personal liberty and freedom of movement, hence my filing of this suit.

”That I am aware that men and officers of the 1st Respondent have been on my trail by tracking my telephone lines and would not give me a breathing space to enjoy my fundamental rights guaranteed under the laws as a free citizen of Nigeria.

”That the 2nd Respondent is hell bent on using men and officers of the 1st Respondent to invite, pester, harass and intimidate me because she is a popular film actress and social media influencer with lots of connections, contacts and followership within and outside Nigeria.

”That it is based on this that I have come before this Honourable Court to seek reprieve, refuge and enforcement of my fundamental rights.

”That this Honourable Court is the last hope of the common man, hence the need for it to compel the 2nd Respondent to tender an unreserved apology to me whilst awarding compensation in the sum of N10,000,000,000 (Ten Billion Naira) in my favour for the mental trauma, emotional stress and severe damage I have suffered as a result of the issues giving rise to this suit.

”That I verily believe that the Respondents herein will not stop conniving to put me in harm’s way through unwarranted, illegal and unconstitutional arrest and detention unless they are restrained by this Honourable Court.”

What we know about Prince Kpokpogri and Tonto Dikeh

A few weeks ago, Nollywood actress, Doris Ogala accused Prince Kpokpogri of being a well-known blackmailer who has clients in many Nigerian sectors, including former governors, present governors, former NDDC MD, and others.

Following the accusation, reports emerged that Kpokpogri was arrested by the DSS after a petition was instituted against him by Tonto Dikeh. A report he vividly denied.

The development comes few weeks after the two ex-lovers, Tonto Dikeh and Prince Kpokpogri ended their three-month-old relationship in a dramatic way.

READ:  "It’s Not By Force To Console Davido In Public Over His Son's Death" - Seun Kuti [Video]