Ohanaeze Ndigbo has lambasted Lauretta Onochie, the Senior Special Assistant on Social Media to President Muhammadu Buhari, who insulted Igbo leaders for demanding the release of Nnamdi Kanu, leader of the Indigenous Peoples of Biafra (IPOB). 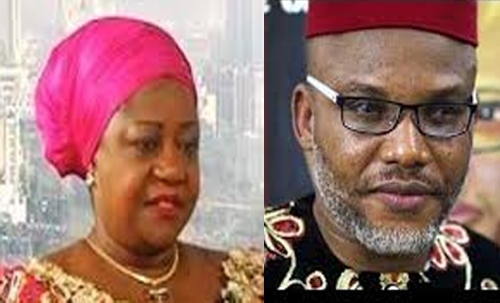 KanyiDaily recalls that the South-East Council of Traditional Rulers and representatives of Igbo Archbishops and Bishops had asked the Federal Government to release Nnamdi Kanu.

But in a statement last week, Lauretta Onochie slammed those calling for the release of Kanu, who she described as a “monster” and a “lunatic” for ordering the executions of many innocent Igbo people and security operatives.

She said, “the demand for the release of a “lunatic is as annoying as it is insulting to the memory of those who have lost their lives in a needless blood-letting in the South East of Nigeria.

The presidential aide added that the alleged killing of notable and average Nigerians in the South-East is the IPOB leader must face trial to defend his actions.

READ:  NAFDAC To Regulate Sniper Insecticide Over Recent Cases Of Suicide In Nigeria

In a statement on Tuesday by its National Publicity Secretary, Chief Alex Ogbonnia, Ohanaeze said Onochie’s remarks smacked of betrayal like Judas and Esau that sold their master and their birthright respectively and suffered ignobly afterwards.

The apex Igbo socio-cultural organization, therefore, called on the people and the traditional ruler of Onitsha Olona, Delta state to call Onochie to order before she nails herself.

The statement read: “For Lauretta Onochie to use such uncouth words as “neonates”, “ignorant”, “lack of sense of decency”, “hide face in shame”, “stupidity”, etc, in reference to the revered traditional rulers and the Archbishops is to say the least unreflective, odious, warped, despicable and sacrilegious.

“The obnoxious role of denigrating one’s kinsmen to be fully ingratiated and assimilated in the other group is as old as mankind. However the entrepreneurs of betrayal have never ended well.

“Onochie is versed in the Holy Bible, where an apostle of Jesus, by name Judas Iscariot was used to betray him; but Judas lived a life of regrets till his sorrowful death. Several instances of betrayal for a delicious pot of porridge abounds but the Greek mythology of how the crafty Odysseus danced naked in the market place is a pointer to the dangers of destroying your own for a filthy lucre.

READ:  Man Caught Having Sex In A Bush With Primary School Student In Kwara State [Photo]

“The letter of appeal to the President by the Council of Traditional Rulers and the Archbishops is strong enough to attract the attention of Mr. President for a discussion with Igbo leaders on the way forward about Nnamdi Kanu and other security challenges in the South East.

“Lauretta Onochie is from Onitcha Olona in Aniocha North Local Government Area of Delta State. The traditional ruler of her community is HRM Obi Christopher Diji. Onochie knows the reverence and honour that go with the titled men and traditional rulers in all the Igbo communities.

“Also, as a Christian, Onochie knows that the clergy men are the representatives of God here on earth. Therefore a letter jointly signed by the Igbo traditional rulers and the Archbishops should command the respect of even the most unscrupulous.

“The claim by Onochie that Igbos hate President Muhammadu Buhari is both mischievous and malicious. Igbos by their character are faithful, audacious and cosmopolitan. In other words, they relate freely with everybody. The demands on the Presidency for a better condition for the Igbo cannot be construed as hatred.

“The warm reception accorded to Mr.President during his visit to Owerri, Imo State by Igbo dignitaries from all walks of life is a testimony to the Igbo willingness to work with Mr. President. What the Igbos want are very specific and the solutions are within the powers of Mr. President.

“It is unfortunate that Onochie believes that the Igbos have orchestrated their self-marginalization in Nigerian politics. Any student of history will readily know that no condition is permanent. If the Igbo, like the mythical Phoenix, have resurrected from the ashes and clinched the Nigerian echelon, the Onochies of this world should know that the world does not end in her position as a Special Assistant to Mr. President.

“It is worth reiterating the ethnic foundations of Nigerian politics and the natural tendency to recognize that every politics is local. Therefore, in 2015 when Dr. Goodluck Jonathan contested with President Buhari, most North voted Buhari as most East voted Jonathan. However, it is on record that several eminent Igbos have worked for President Buhari in all his elections. In the 2019 presidential election, several highly placed Igbos ensured that President Buhari secured 25% votes cast in all the Igbo states. The onus of magnanimity in victory rests on President Buhari.

By the way, during the 1979 presidential election, the Igbo voted Dr. Nnamdi Azikiwe enmasse just as the Yoruba voted Chief Obafemi Awolowo. At the end of the election, Alh. Shehu Shagari won and was sworn in as the President of the Federal Republic of Nigeria. Shagari showed fatherliness and sportsmanship by appointing several Igbos in his cabinet. That is the ideal.

“The claims that the Igbo are fixated in the “grudges of the Nigerian-Biafran Civil war which they have passed on to their younger ones” is very fallacious and intended to sow hate and suspicion in the harmonious inter-ethnic relations among Nigerians. Onochie should know that the Igbo are fully integrated with other ethnic groups across the country.

“Perhaps, Onochie as an Igbo woman, is projecting her narrow thoughts and obsolete imaginations in others. For the avoidance of doubt, the Igbo are forward looking, pushful, creative and transactional. To occupy their minds with a war that was fought over 50 years ago is backpedalling and quite uncharacteristic of Igbo entrepreneurship.

“For Laurreta Onochie to avail herself for a hatchet job against the Igbo pantheon or what Carl Jung called the Igbo “collective unconscious” is an assignment that no Hausa, Fulani, Yoruba, Tiv, Edo, Igalla, Nupe, Ijaw or Efik or any other woman, can in conscience contemplate.”

KanyiDaily recalls that the Spiritual Director of Adoration Ministry Enugu, Rev. Fr. Ejike Mbaka had attacked Igbo leaders who are shying away from talking about Nnamdi Kanu. 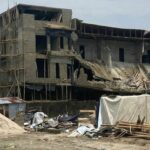 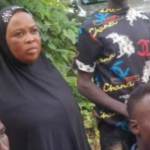