Nigerian cinematographer, ThankGod Omori, popularly known as TG Omori, has replied a controversial singer, Portable, who called him out over the outrageous charges he billed him to shoot a music video shoot. 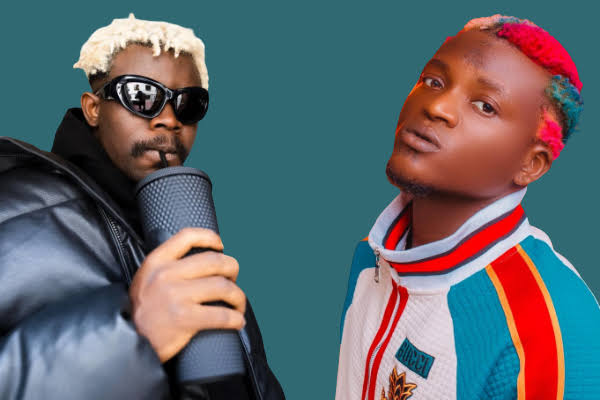 In a video shared on his Instagram page, the singer had called out the video director for charging him $50,000 for his work.

Portable questioned if TG Omori wasn’t the same person that shot the video of his hit song ‘Zazoo’, wondering if dead people and ritualists were the ones patronizing the video director.

Nothing that there are many other people who are willing to do the job, Portable said he will shoot the video without Omori, pointing out how his helper wouldn’t stress to help him.

READ:  Timaya Breaks Silence After Being Accused Of Hitting A Young Lady And Running Away

Portable said, “No be you shoot Zazoo video and I said let me meet you. Many people want to shoot video for me. I am not well, you don’t know that I am mad. $50,000 because of what? Me self have madness.

“Shey dead people or ritualists are the ones shooting video from you. You dey whine Jesus. Industry has cacus.

“Do you want me to do ritual? Is that what you use to shoot video for Asake and Olamide?

“Who go hep me no go stress me. One day I go reach that level. I go shoot that video without you”.

Reacting on his Twitter page, Omori revealed that he shot Portable’s ‘Zazoo’ video without collecting a dime or making noise about it.

The video director also revealed that Portable is only trying to employ the same scheme as rapper, Blaqbonez just to push the coming music video views.

He wrote, “Somebody tell Portable Zazoo was a free video. Did it without ever mentioning a word. Bruh has a video and never knew how it came about. But hsi calling me out for a discounted price.

“Lol portable knows what he’s doing. The message came in 15days ago he didn’t react but boy has a new video in works. he’s trynna use the Blaqbonez strategy to push views. Ogbon sodiqi.” 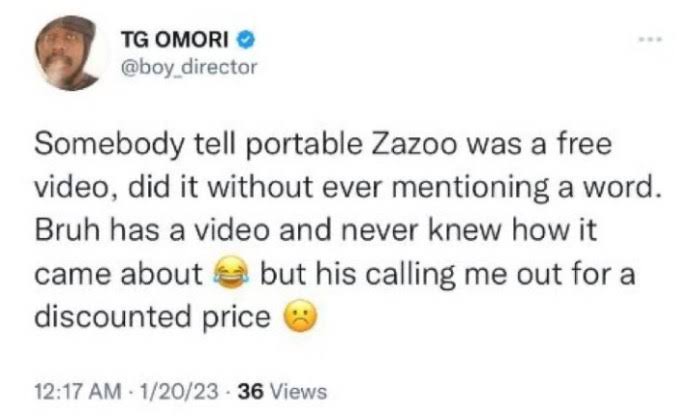 This comes a few weeks after Portable said that nobody is responsible for his fame, claiming that he was already famous before he met rapper, Olamide and dancer, Poco Lee.

Related Topics:celebritiesEntertainmentFeudgistNigeriaPortableTG Omori
Up Next