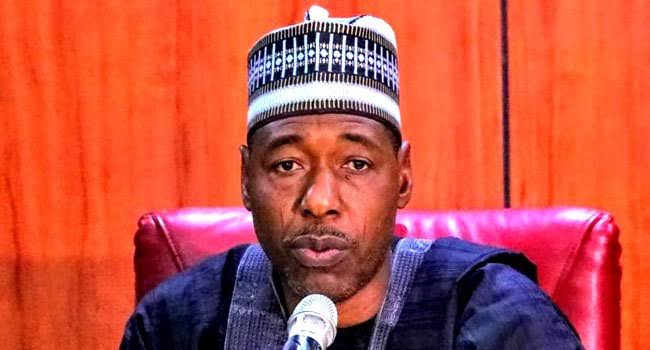 Governor Zulum stated this while speaking with state house correspondents after meeting with President Muhammadu Buhari on Friday, November 6, 2020.

He warned #EndSARS protesters, saying Boko Haram crisis in the North Eastern part of the country started with protests by youths against the use of motorcycle helmets in Maiduguri.

According to him, over one million people have now been displaced as a result of Boko Haram activities which were fallouts of the protests against the use of helmet in the state capital.

“On the issue of ENDSARS, I am calling on all Nigerians especially the youths to be very careful. The whole Boko Haram saga started as a result of the protest by some youths in Maiduguri against the use of helmet by motorcycle riders, you have seen the situation now,” he said.

“Over one million people have been displaced and the most affected population are the vulnerable, the youths. Some of those that led the protests have left Borno state, they are either staying in Abuja or Lagos or abroad. we have to be very careful.”

Governor Zulum added that the #EndSARS protest did not degenerate into crisis in Borno because of how the government handled it.

“So in Borno State, the entire situation did not take such dimension as that of Lagos because we told them to sit down and examine the situation and recall the past when the situation was so bad,” he said.

“Now, there is emerging peace in Borno State and we don’t want anybody to disrupt the peace. The youths are with us, we are taking very good care of them, palliatives we are distributed to them as at when due, we are giving them some certain financial support and I think the best way every Nigerian should seek for his/her right is through legitimate means, otherwise we are not going anywhere. Peace is very important,” he said.

Meanwhile, Kaduna State Governor, Nasir El-Rufai said he nearly cried seeing the level of destruction of public properties in Lagos State following the violence that erupted after the #EndSARS protest.

READ:  It's Idiotic To Say President Buhari Is A Clone From Sudan Named Jubril - Lai Mohammed