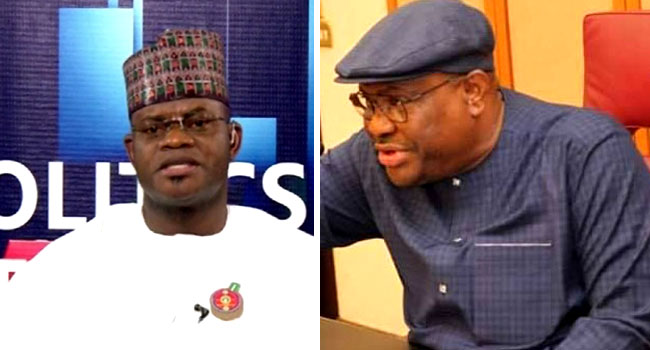 Yahaya Bello made this claim on Channels Television’s Politics Today programme on Thursday, while reacting to the defection of the Ebonyi State Governor, David Umahi, from the PDP to the APC.

According to him, he had predicted that 10 opposition governors will join the ruling party and Ebonyi State Governor was the first of them.

Governor Bello said that the APC would welcome nine more governors from the opposition and Wike might be the last person to join the ruling party.

“I think probably, I can just give you an expo. The expo I am going to give to you is that Governor Wike might be the last to join this party – the All Progressives Congress, others are lining up. They will soon be here,” he said.

READ:  Police React To Claim Of Lady Dying Due To Infection After Sleeping With Dog

“I said it long ago, not today when the party (PDP) was going through some challenges; I did say that there are 10 governors from the opposition parties that will join APC.

“We have seen one; one that is even as equal as 10, he has joined us, nine to go. Just mark my words; I don’t lie, I will never lie, and I will never deceive anybody.

“Umahi is here with us, more are coming. I am very sure that Governor Wike will be the 10th person (governor) to join the APC, the remaining eight are already knocking, and by the grace of God, we are working all the necessary platform for them to come in here in peace, so they are on their way.”

KanyiDaily recalls that Governor Wike had alleged that Umahi’s presidential ambition was the reason behind his defection from PDP to APC. Wike said Umahi told him in confidence that he wants to be president of Nigeria in 2023.

#EndSARS: “We Stand By Our Report On Lekki Shooting” – CNN Replies Nigerian Goverment

Former Polytechnic Lecturer Shoots His Wife In The Eye, Then Commits Suicide In Kaduna