Osun State Governorship candidate of the Peoples Democratic Party (PDP), Ademola Adeleke has addressed a video where he was seen promising voters money in different currencies during the July 16 poll.

KanyiDaily had published a video showing Adeleke boasting that he has enough money both in naira and foreign currencies to give to voters during the Osun guber elections.

The PDP candidate said that he was more prepared for the 2022 governorship race than in 2018 when he was defeated by Governor Adegboyega Oyetola of the All Progressives Congress (APC).

“Osun people, you are the ones to decide. If it is about money, I have enough. I came with plenty of money. And it is not only naira; I came with dollars, pounds, and euros. This time in Osun, it is fire for fire,” Adeleke said in Yoruba.

Addressed his comment during the governorship election debate organized by Channels Television on Sunday, Adeleke said he has no plan to buy votes during the election.

According to him, the comment about his “pounds, dollars, and euros” was a description of the foreign investment he intends to bring into Osun if he emerges victorious.

“First of all, our family is known for philanthropy, we give people scholarships home and abroad. So, when I was talking about pounds and dollars I meant I will use my international connections to bring investments into Osun state.

“When you’re too popular, when you say one thing, they’ll twist it. When you talk of propaganda, this present government are the best at it,” Adeleke said.

KanyiDaily recalls that Ademola Adeleke was declared the governorship candidate of the PDP in Osun after winning the primary election on Tuesday, March 9. 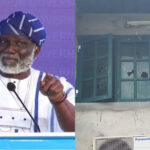