Some Nigerians who are loyal to former President, Goodluck Jonathan on Friday stormed the headquarters of the ruling All Progressives Congress (APC), demanding his adoption as the party’s consensus candidate.

Addressing reporters in front of the APC secretariat in Abuja, Umar Waja, who spoke on behalf of the group, said Jonathan would steer the country to the “promised land” if elected president.

He said, “We are calling on President Buhari and the national working committee (NWC) under the distinguished leader of senator Abdullahi Adamu to adopt Goodluck Jonathan as their consensus candidate for the betterment of this country,

“We saw what he did during the last six years when he was piloting the affairs of this country. We need him at this crucial time because Nigeria needs to be united and we believe that he will be the only person that will unite this country so that he will take us to the promised land to where we ought to be and where we should be.

“Mr President has made it clear that as far the governors are concerned they have adopted their own concept of bringing out their successors so they should also allow him to bring his successor that is why we want Mr President to bring in Jonathan as consensus candidate.

“At this crucial time, we know Jonthan will lead this country very well. If Jonathan is the consensus candidate, he will win the election convincingly.” 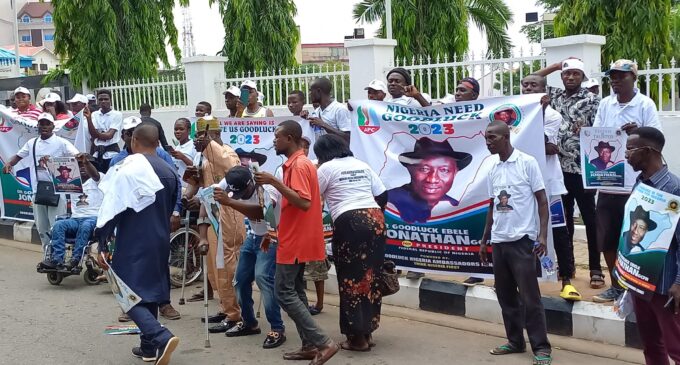 KanyiDaily recalls that Goodluck Jonathan is yet to formally declare a presidential bid and his name was missing from the list of those the APC cleared for screening.

READ:  I Would Rather Quit Politics Than Spill Blood To Win Election - Governor Hope Uzodinma