Hushpuppi To Be Sentenced

The 39-year-old convict was initially scheduled for sentencing on February 14 but it was moved to July 11 before it was again postponed for September 21 this year.

Reacting to an email inquiry by Channels Television on Friday, August 26, the US court’s Director of Media Relations, Thom Mrozek confirmed that Hushpuppi had long pleaded guilty to the alleged $1.1m fraud last year and would be sentenced later this year.

“Mr. Abbas is currently scheduled to be sentenced by a federal judge in Los Angeles on September 21,” Mrozek said.

According to court documents, Hushpuppi risks “20 years’ imprisonment; a 3-year period of supervised release; a fine of $500,000 or twice the gross gain or gross loss resulting from the offence”.

READ:  BBNaija Star, Mercy Eke Breaks Down In Tears As She Buries Her Father In Imo [Video] 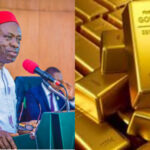