A report by the Global Terrorism Index (GTI) has ranked Nigeria the third most terrorised country in the world for the sixth consecutive time since 2014.

The report stated that the number of deaths attributed to Boko Haram in Nigeria increased by 25 percent from 2018 to 2019, making reference to the deadliest terrorist attack in 2019 when assailants attacked a funeral in Badu, Borno State.

GTI noted that due to the rise in the number of casualties from Boko Haram attacks in the north-east, Nigeria is second to record a fall in violent deaths after Afghanistan in 2019.

“Nigeria had the second largest fall in total deaths, owing largely to a 72 percent reduction in fatalities attributed to Fulani extremists,” the report stated.

“Despite this decrease, the number of deaths attributed to Boko Haram increased by 25 percent from 2018 to 2019.”

“Deaths from terrorism in Nigeria are now 83 percent lower than at their peak in 2014,” the report stated.

GTI also stated that Nigeria is still vulnerable to more attacks as “renewed activity by Boko Haram in Nigeria and neighbouring countries, including Cameroon, Chad and Niger, remains a substantial threat to the region.”

“In 2019, Boko Haram carried out 11 suicide bombings causing 68 fatalities. Suicide bombings accounted for 6% of all terror-related incidents by Boko Haram in 2019, marking an 89% decline from their peak in 2017,” it report stated.

“At least 70 people were killed and 10 others were wounded in the attack and ensuing clash. The two main factions of Boko Haram, the Islamic State West African Province (ISWAP) and the followers of Abubakar Shekau, are both engaged in an insurgency campaign against the Nigerian government.”

GTI further stated that the violence by the two main factions of Boko Haram has taken a large toll on the civilian population, particularly in the northeast.

It said the continued attacks have internally displaced more than two million people and caused a further 240,000 Nigerian refugees to flee to neighbouring countries. 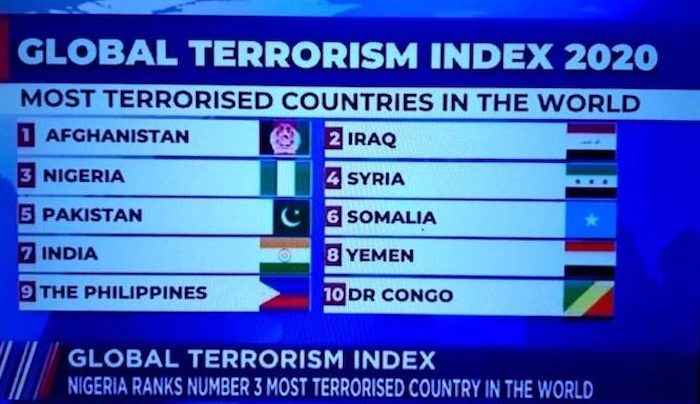 KanyiDaily recalls that Boko Haram leader, Abubakar Shekau had claimed that he cannot be arrested by the Nigerian Army because he was doing the work of God and ‘He will protect him’.

Shekau stated this in response to the Nigerian Army’s fresh manhunt for him and other Boko Haram leaders who have been terrorizing the northern part of the country.